Commenting on the Company’s performance, Chris Pappas, Trinseo President and Chief Executive Officer, said, “Our results for Emulsion Polymers were in line with expectations with another solid quarter. The Plastics Division exceeded expectations due to higher sequential margins in both Styrenics and Engineered Polymers. We had strong fundamental performance during the fourth quarter, with Adjusted EBITDA excluding inventory revaluation of $104 million. This result reflects strong margins in styrene monomer production and in our derivative businesses, as well as record SSBR sales volume and equity affiliate income.”

Commenting on full year 2014, Pappas continued, “I am proud of what we achieved during the year. Excluding inventory revaluation, Adjusted EBITDA improved year-over-year despite lower styrene monomer margin of approximately $40 million. In addition, our successful IPO in June enabled us to pay down 10% of our long-term debt. Finally, we restructured our polycarbonate business which will result in substantial cost savings and incremental EBITDA.”

Full year revenue decreased 3% versus prior year due primarily to the pass through of lower raw material costs. Adjusted EBITDA for the year decreased $16 million due to inventory revaluation in the fourth quarter. Adjusted EBITDA excluding inventory revaluation increased $8 million versus prior year driven by improved performance in the Synthetic Rubber and Engineered Polymers.

“We expect very strong results in the first quarter excluding inventory revaluation driven by customer restocking and higher margins on lower costs.  For full year 2015, we expect healthy year-over-year EBITDA improvement driven by cyclical rebound of styrene monomer, structural and cyclical improvement in polycarbonate, and volume growth in Synthetic Rubber and Performance Plastics, which will more than offset headwinds from the weaker Euro,” Pappas continued.

Trinseo will host a conference call to discuss its fourth quarter and full year 2014 financial results tomorrow, Thursday, March 5, 2015 at 10 AM Eastern Time.

Trinseo has posted its fourth quarter and full year 2014 financial results on the Company’s Investor Relations website. The presentation slides will also be made available in the webcast player prior to the conference call. The Company will also furnish copies of the financial results press release and presentation slides to investors by means of a Form 8-K filing with the U.S. Securities and Exchange Commission (SEC). 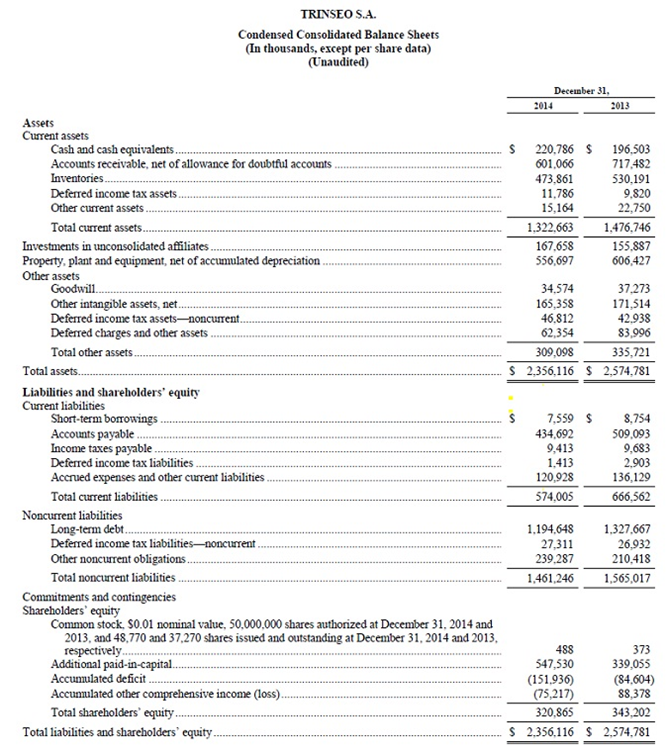 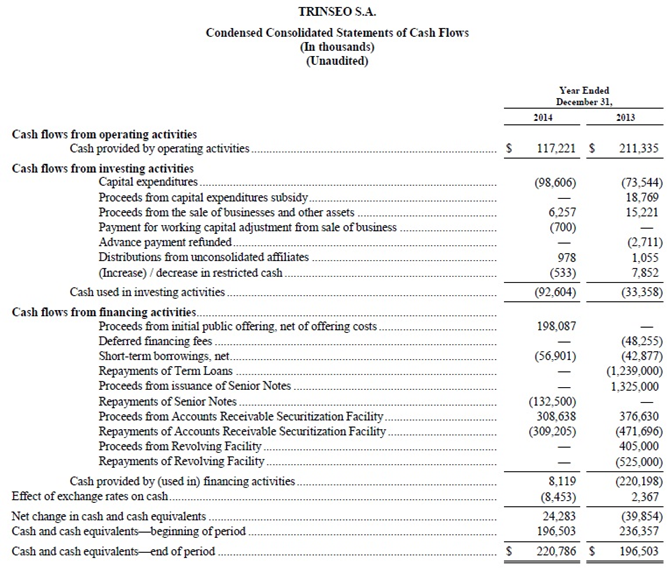 We also believe that the presentation of Adjusted EBITDA provides investors with a useful analytical indicator of our performance and of our ability to service our indebtedness. We define Adjusted EBITDA as income (loss) from continuing operations before interest expense, net; income tax provision; depreciation and amortization expense; loss on extinguishment of long-term debt; asset impairment charges; advisory fees paid to affiliates of Bain Capital; gains or losses on the dispositions of businesses and assets; restructuring and other non-recurring items. 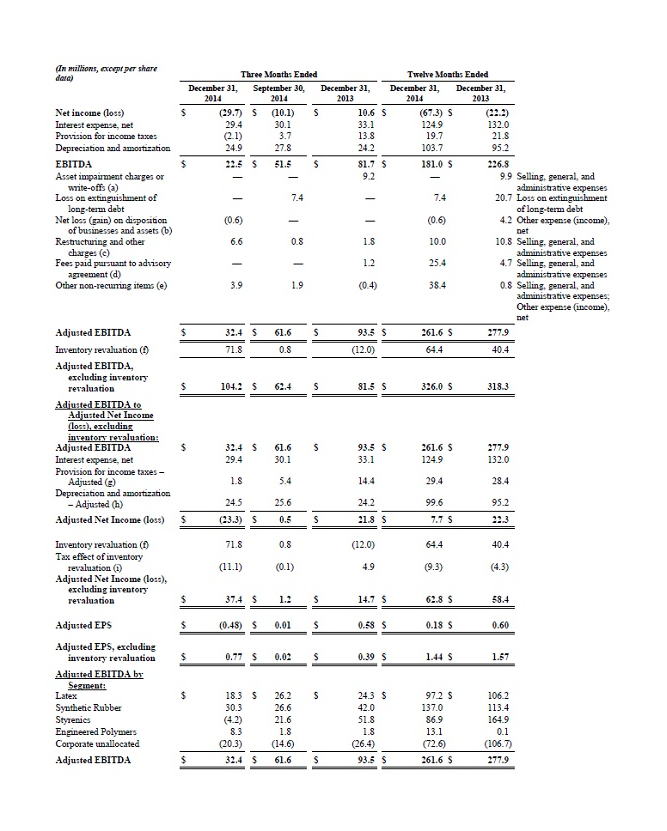 (a) Asset impairment charges or write-offs for three and twelve months ended December 31, 2013 relate primarily to the $9.2 million impairment charge for fixed assets at our polycarbonate manufacturing plant in Stade, Germany.
(b) Net loss (gain) on disposition of businesses and assets for the years ended December 31, 2014 and 2013 of $(0.6) million and $4.2 million, respectively, relate to the sale of the Company’s EPS business, which closed in September 2013, and for which a contingent gain of $0.6 million was recorded during the fourth quarter of 2014.
(c) Restructuring and other charges for the three and twelve months periods above were incurred primarily in connection with the shutdown of our latex manufacturing plant in Altona, Australia and the restructuring within our Engineered Polymers business. During the three months ended December 31, 2014, we incurred $6.6 million in charges for decommissioning and demolition costs at the Freeport, Texas facility related to our Engineered Polymers business restructuring. Note that the accelerated depreciation charges incurred as part of the 2014 restructuring within our Engineered Polymers business are included within the depreciation caption above, and therefore not included as a separate adjustment within this caption.
(d) Represents fees paid under the terms of our advisory agreement with Bain Capital. For the year ended December 31, 2014, this includes a charge of $23.3 million for fees incurred in connection with the termination of the Advisory Agreement, pursuant to its terms, upon consummation of the Company’s IPO in June 2014.
(e) Other non-recurring items incurred for the year ended December 31, 2014 include a one-time $32.5 million termination payment made to Dow in connection with the termination of our Latex JV Option Agreement. Additional amounts incurred during 2014 consist of costs related to the process of changing our corporate name from Styron to Trinseo, as well as severance charges incurred in conjunction with the employment termination of certain key employees.
(f) See the discussion above this table for a description of inventory revaluation.
(g) Adjusted to remove the tax impact of the related items noted above in (a) – (e). Additionally, the three and twelve months ended December 31, 2014 exclude a $0.6 million tax benefit recognized due to the release of a reserve for an uncertain tax position. The year ended December 31, 2014 also excludes a $2.7 million tax benefit related to a previously unrecognized tax benefit resulting from the effective settlement of a 2010 and 2011 audit with the IRS and the impact of a $1.0 million valuation allowance recognized in Greece. The year ended December 31, 2013 excludes $2.2 million, net of tax expense related to the impact of tax law changes, provision to tax return adjustments and the establishment of valuation allowances related to cumulative prior year results.
(h) Excludes accelerated depreciation related primarily to the termination of our contract manufacturing agreement with Dow at Dow’s Freeport, Texas facility during the year ended December 31, 2014.
(i) Amounts consist of the tax impact of inventory revaluation each period, which is removed in order to calculate Adjusted Net Income (loss), excluding inventory revaluation. The tax impact of inventory revaluation is estimated in a similar manner as tax calculated on all other earnings during each period.