Additionally, results for the second quarter included Adjusted EPS of $2.30 per diluted share and Adjusted EBITDA of $182 million; these included a favorable inventory revaluation impact of $0.22 and $13 million, respectively.

Commenting on the Company’s performance, Chris Pappas, Trinseo President and Chief Executive Officer, said, “I am very pleased with our performance in the second quarter, as we exceeded our Adjusted EBITDA and Adjusted EPS guidance.  We continue to see a higher level of profitability driven by good results in the Performance Materials division as well as sustainable, structural improvements in the Basic Plastics & Feedstocks division.  We repurchased an additional 800,000 shares during the quarter, bringing our year-to-date purchases to almost 2.4 million, or about 5% of shares outstanding.  In addition, we received Board approval for an annual cash distribution of $1.20 per share, and the first quarterly distribution was paid on July 20.”

Pappas continued, “Our Performance Materials division delivered $76 million of Adjusted EBITDA excluding inventory revaluation in the second quarter, slightly ahead of guidance, and keeping it on track to deliver at least 5% EBITDA growth in 2016.  Our Basic Plastics & Feedstocks division had a record quarter with $115 million of Adjusted EBITDA excluding inventory revaluation.  This result exceeded our guidance due mainly to higher than expected styrene margins.”

Cash provided by operating activities was $95 million. Cash used in investing activities was $27 million, resulting in Free Cash Flow for the quarter of $68 million.  This included $30 million in dividends from Americas Styrenics, $27 million of capital expenditures, and $30 million of cash interest payments. At the end of the quarter we had record liquidity of $904 million, which included $465 million of cash, inclusive of the $37 million cash outlay for the repurchase of 800,000 shares.

Commenting on the outlook for the full year of 2016 Pappas said, “Adjusted EBITDA excluding inventory revaluation was $322 million for the first half of the year.  We believe the second half of the year will continue to show sustained EBITDA strength, and therefore, we are increasing our full-year guidance to $605 to $615 million of Adjusted EBITDA excluding inventory revaluation which translates into an expected Adjusted EPS range of $6.95 to $7.10.”

Trinseo will host a conference call to discuss its Second Quarter 2016 financial results tomorrow, Tuesday, August 2, 2016 at 10 AM Eastern Time.

Trinseo has posted its Second Quarter 2016 financial results on the Company’s Investor Relations website. The presentation slides will also be made available in the webcast player prior to the conference call. The Company will also furnish copies of the financial results press release and presentation slides to investors by means of a Form 8-K filing with the U.S. Securities and Exchange Commission. 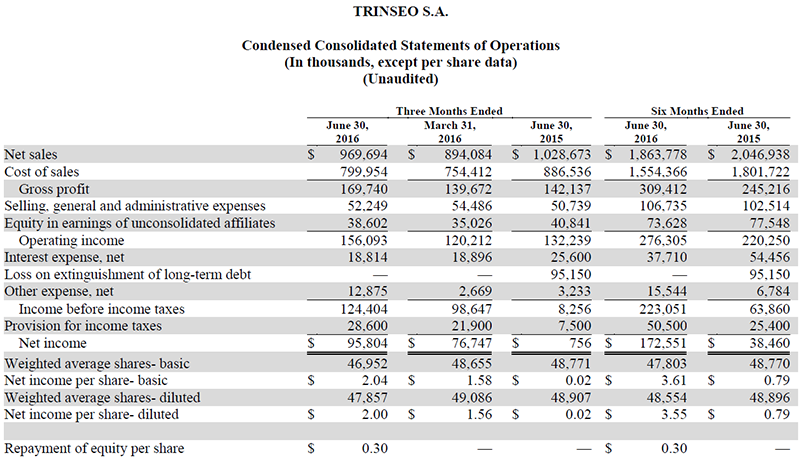 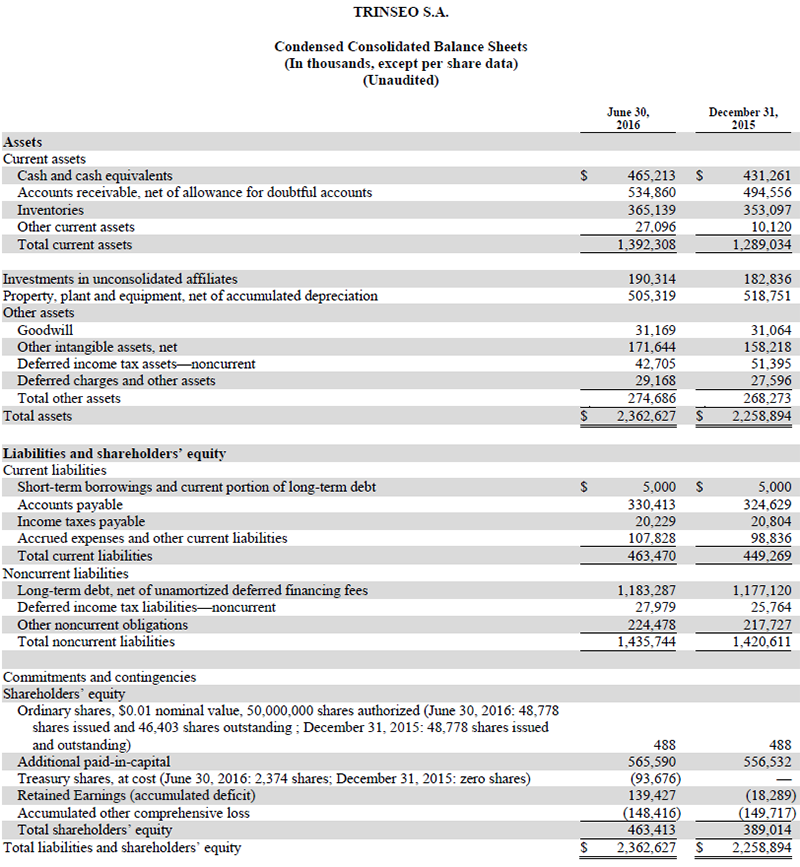 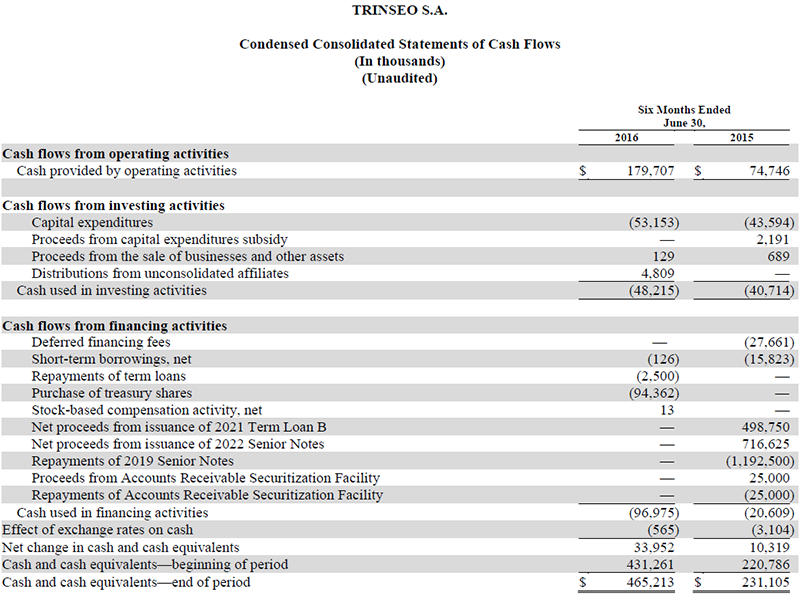 EBITDA is a non-GAAP financial measure that we refer to in making operating decisions because we believe it provides our investors with meaningful supplemental information regarding the Company’s operational performance. We present EBITDA because we believe that it is useful for investors to analyze disclosures of our operating results on the same basis as that used by our management. We believe the use of EBITDA as a metric assists our board of directors, management and investors in comparing our operating performance on a consistent basis because it removes the impact of our capital structure (such as interest expense), asset base (such as depreciation and amortization) and tax structure.

We also believe that the presentation of Adjusted EBITDA provides investors with a useful analytical indicator of our performance and of our ability to service our indebtedness. We define Adjusted EBITDA as income (loss) from continuing operations before interest expense, net; income tax provision; depreciation and amortization expense; loss on extinguishment of long-term debt; asset impairment charges; gains or losses on the dispositions of businesses and assets; restructuring and other items.

We present Adjusted EBITDA excluding inventory revaluation in order to facilitate the comparability of results by investors from period to period by adjusting cost of sales to reflect the cost of raw materials during the period, which is often referred to as the replacement cost method of inventory valuation. We believe this measure minimizes the impact of raw material purchase price volatility in evaluating our performance. Our approach to calculating inventory revaluation is intended to represent the difference between the results under the FIFO and the replacement cost methods. However, our calculation could differ from the replacement cost method if the monthly raw material standards are different from the actual raw material prices during the month and production and purchase volumes differ from sales volumes during the month. These factors could have a significant impact on the inventory revaluation calculation. 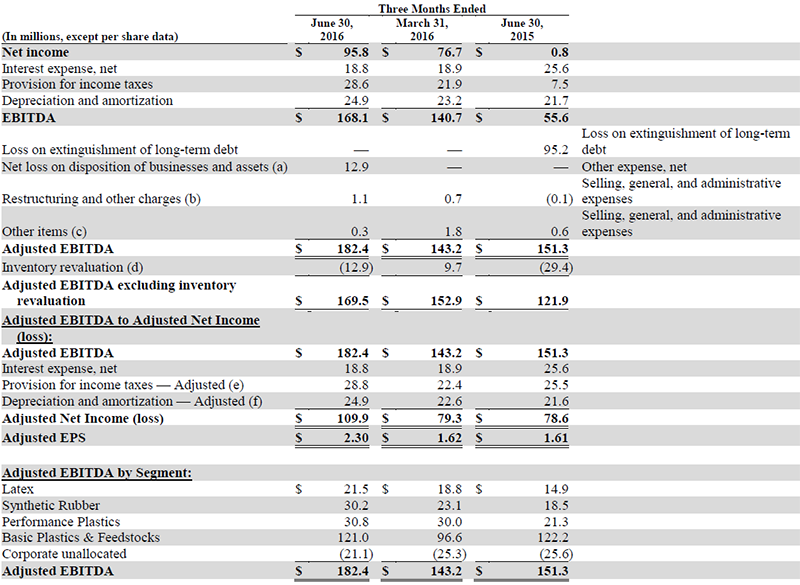 (a) Net loss on disposition of businesses and other assets for the three months ended June 30, 2016 represents the impairment charge recorded for the estimated loss on sale of our latex and automotive businesses in Brazil, primarily related to the unrecoverable net book value of property, plant, and equipment along with certain working capital balances.

(b) Restructuring and other charges for the three months ended June 30, 2016 relate to charges incurred in connection with the decision to divest our operations in Brazil as well as the closure of our Allyn’s Point manufacturing facility in Gales Ferry, Connecticut.  Charges for the three months ended March 31, 2016 relate solely to the closure of the Allyn’s Point facility.

(d) See the discussion above this table for a description of inventory revaluation.

(e) Adjusted to remove the tax impact of the loss on extinguishment of debt and the related items noted in (a), (b), (c) and (f).

(f) For the three months ended March 31, 2016, this amount excludes accelerated depreciation of $0.5 million related to the closure of our Allyn’s Point facility.

For the same reasons discussed above, we are providing the following reconciliation of forecasted net income to forecasted Adjusted EBITDA and Adjusted EPS for three months ended September 30, 2016 and the full year ended December 31, 2016.  See “Note on forward-looking statements” above for a discussion of the limitations of these forecasts.

(h) Weighted average shares calculated for the purpose of forecasting Adjusted EPS do not forecast significant future share transactions or events, such as repurchases, significant stock-based compensation award grants, and changes in the Company’s share price.  These are all factors which could have a significant impact on the calculation of Adjusted EPS during actual future periods.

Trinseo (NYSE: TSE) is a global materials solutions provider and manufacturer of plastics, latex binders, and synthetic rubber. We are focused on delivering innovative and sustainable solution to help our customers create products that touch lives every day - products that are intrinsic to how we live our lives - across a wide range of end-markets, including automotive, consumer electronics, appliances, medical devices, lighting, electrical, carpet, paper and board, building and construction, and tires. Trinseo had approximately $4.0 billion in revenue in 2015, with 18 manufacturing sites around the world, and more than 2,200 employees.